On December 1st  – World AIDS Day, volunteers from the “Come rise” club (клуб ‘’Ела изгрей’’) from NAVA foundation organized an Anti-AIDS campaign on the main street of Plovdiv. The campaign was titled “Zero stigma, zero discrimination”. The volunteers, who work on Component 7 of the National program “Prevention an 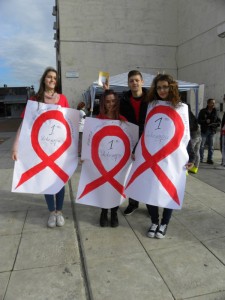 d control of HIV/AIDS”, pitched a tent on the main street of the city and offered to the passers-by to participate in the quiz the volunteers had prepared, to take photos with the red ribbon and also to make sure if they know how to correctly put on a condom in the so-called ‘’’Love box’’, that was specially made for the case.

Simultaneously with that, the volunteers had prepared teams of “live red ribbons”, that were giving away condoms, health education materials and red ribbons, which are a symbol of the World AIDS Day, to the pedestrians. The volunteers had the opportunity to call on the residents of Plovdiv to examine their HIV status in one of the few mobile cabinets for anonymous and free counseling and testing for HIV/AIDS, which were located along the central street of the city.

On December 1st, the No 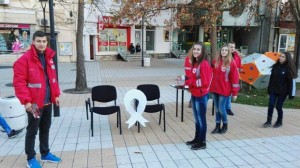 n-Profit Organisations Club of Targovishte organized together with its partners a joint campaign for the distribution of condoms, flyers, red ribbons and leaflets in the central parts of the city. The initiative aimed at increasing public awareness of human immunodeficiency virus, popularization of HIV testing, giving everyone the opportunity to find out their HIV status, and reducing stigma and discrimination against HIV-positive people.

Volunteers from the “Thirst for Life” Association – Sliven also marked December 1st with an initiative in the city centre.From a boothe they had specially prepared,the volunteers handed out information materials, condoms and ribbons to the residents of Sliven and motivated the citizens to examine their HIV status fo 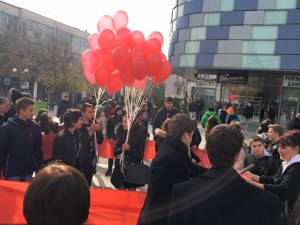 December 1st was marked in Blagoevgrad as well by the “Information Center for Mental Health and its partners” with a campaign at the centre, where volunteers pitched a large red ribbon on the facade of the city mall.