The second edition of the voluntary social campaign ‘Eastern/Velikden for Everyone’ started under the patronage of the social mediator Maya Manolova. Her aim is just before the sacred Christian celebration to be gathered some food and other necessities for the people who would not have the opportunity to receive eastern allowance. The social campaign is going to be held from 07.03.2017 to 17.04.2017.

During the first edition of the campaign in 2016 were eventually collected 1 000 000 leva in the form of donations of food and money. With this endowment, converted to coupons for of 20lv each, 33 000  retires were able to shop in 5 000 markets throughout the whole country. This year the conditions remain the same – the coupons for food would be with equivalent value and they would be used for 5 000 places for shopping in  Bulgaria.

Everyone can be engaged in the campaign by sending a SMS to 1255 – this is the number via which you have the opportunity to support and encourage our mothers, fathers, our parents, the elderly people, by the virtue of whom we were gifted our right of existence and emphatic life. Get involved! 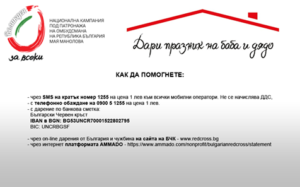